Motorists were today caught red handed using their mobile phones despite new zero-tolerance laws being introduced in Britain that guarantees a £200 fine plus six points on their licence.

These alarming photographs were taken of at least eight motorists flouting the law on the A338 in Bournemouth, Dorset, this morning.

The law even applies to people who check their phones while stuck in traffic or at a red light. Drivers who break them will be handed a £200 fixed penalty notice plus six points on their licence.

Several drivers were clearly seen taking phone calls, reading messages and looking at photos as they drove along a 40mph dual carriageway.

In one, a man in a large van could be seen holding a phone in his hand and while another is mounted on his dashboard.

A second driver was spotted scrolling down a social media news feed and looking at photos. A woman was seen checking her messages, while a white-van man was texting.

One hungry motorist was even caught attempting to eat a baguette. It’s not illegal to eat while driving, but police can arrest for careless driving if they consider someone is not in proper control of the vehicle.

Their actions have been blasted as ‘reckless’ by road safety specialists who said they risked ‘ruining lives.’ 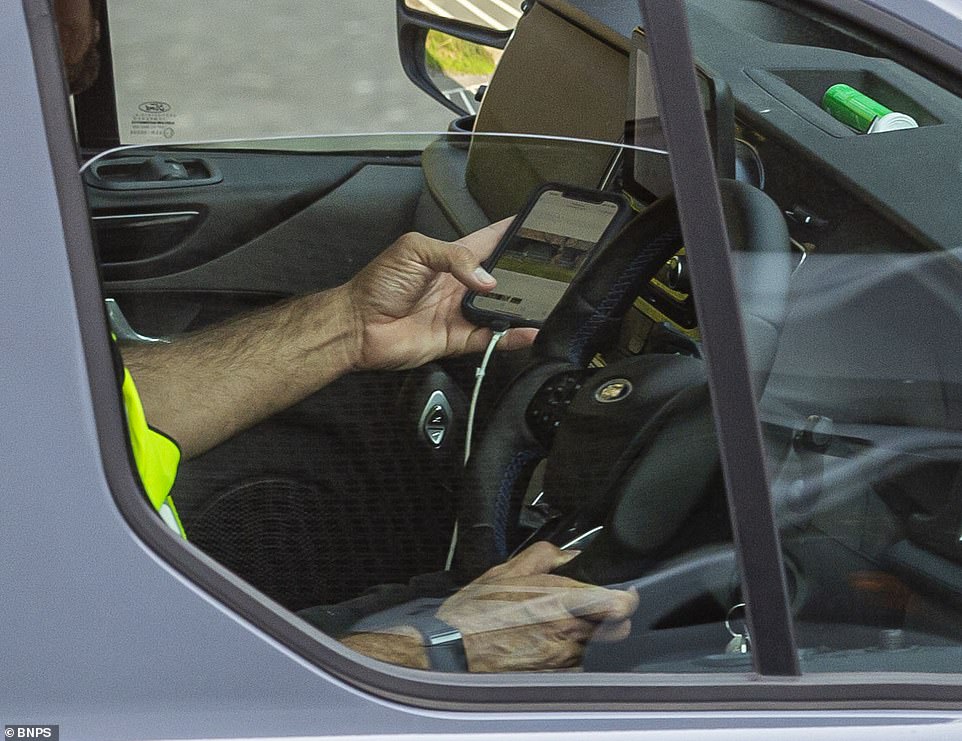 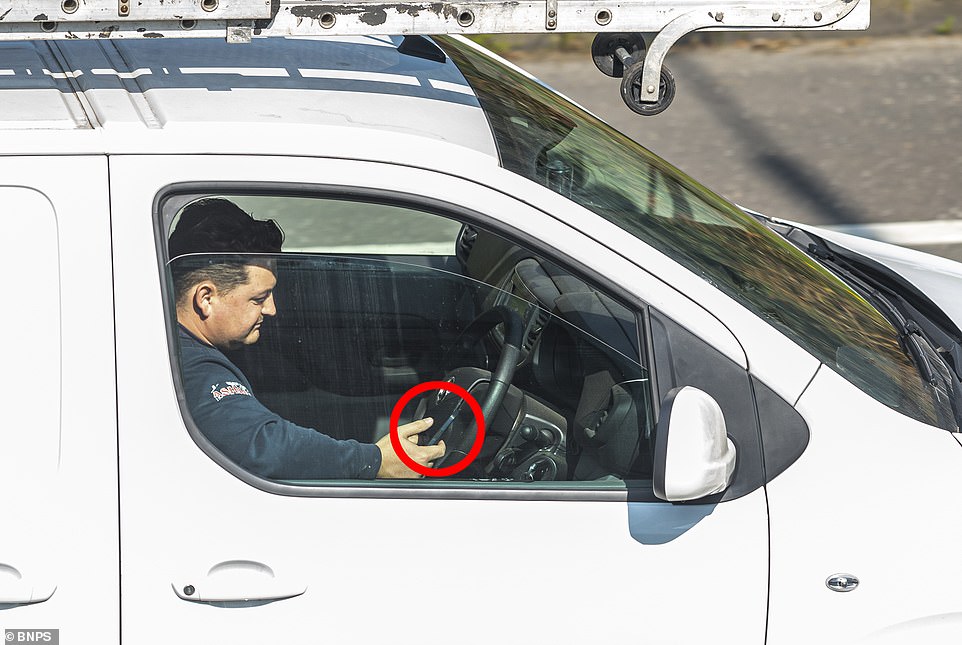 This motorist was flouting the rules on his iPhone. If caught by police he faces a £200 fixed penalty notice plus six points on their licence 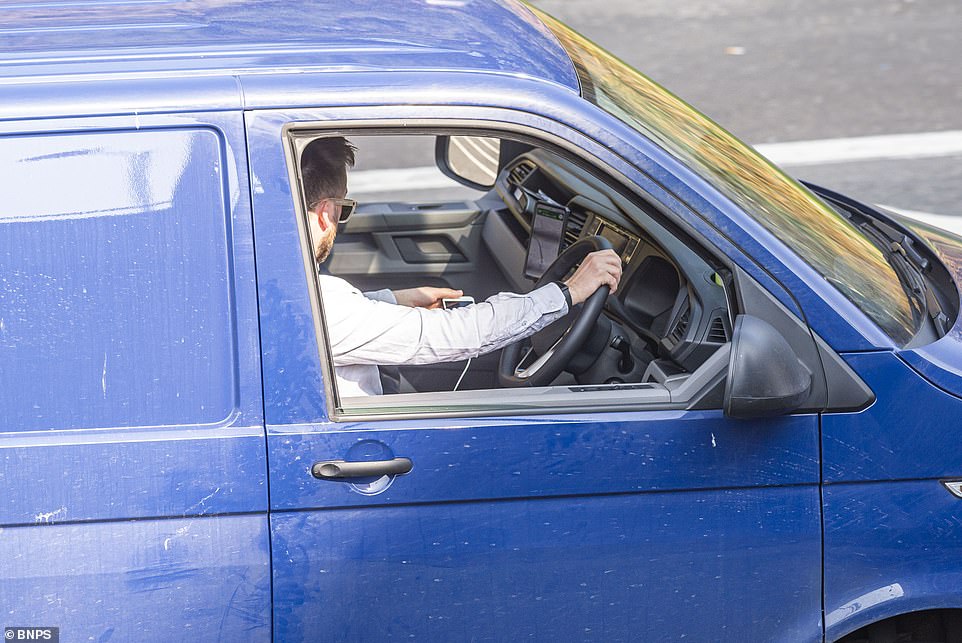 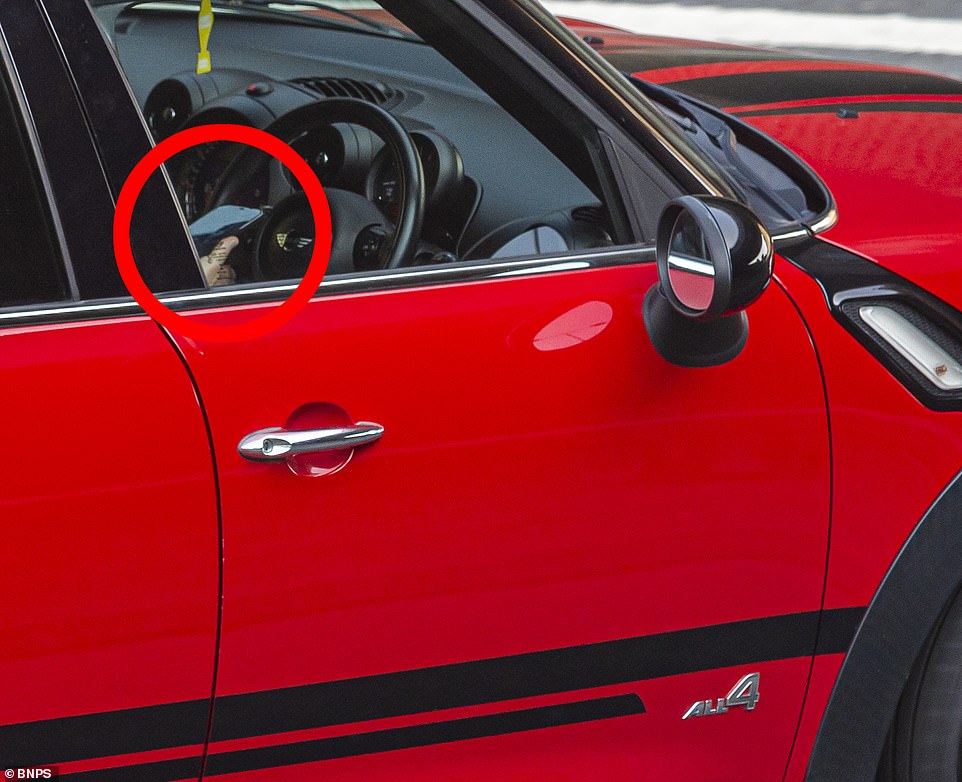 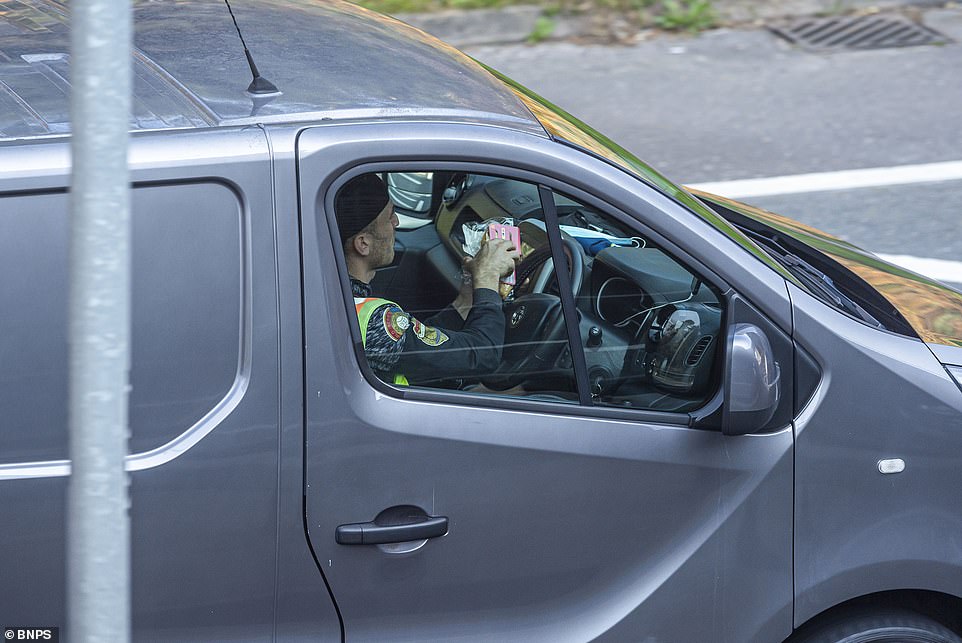 This driver was spotted tucking into his baguette. This is not illegal unless police think he is driving dangerously

– making, receiving, or rejecting a telephone or internet based call

– sending, receiving or uploading a photo or video

In January former footballer Frank Lampard had his case of using a phone while driving dropped because it could not be proven that it was turned on at the time even though he was handling it.

The only exceptions are for making calls to emergency services when there is no safe place to pull over and to use contactless payments like Apple Pay at fast-food drive-throughs and to pay tolls, while hands-free calls are also still permitted.

Jack Cousens, head of roads policy at AA, said: ‘The change to the law is a great step towards road safety.

‘We have to do all that we can to eliminate distractions and make sure that everybody keeps their hands on the wheel and their eyes straight.

‘You cannot accidentally pick up your phone – that is a conscious choice which puts yourself and other road users at risk.

‘Just picking it up at a traffic light falls foul of the rules. You have to be parked safely with your engine turned off.

‘If you’re too tempted by the buzzing and the pings, turn your glove box into a phone box or, even better, turn it off.

‘The most important thing is to get to your destination safely – your notifications can wait until then.

‘We have a responsibility not just to ourselves but to every other person who uses the road. You are twice as likely to crash while texting than you are if you are drink driving.

‘These new rule changes are essential because the existing ones were made when mobile phones were far simpler.

‘Smartphones can do so many things and as a result have so many more distractions.’

Drivers will still legally be allowed to use their phones as sat-navs if they are secured in a mount on the windscreen – though you can still be punished if the police believe a driver is touching a device in a cradle.

The minimum punishment for being caught handling a phone at the wheel is a £200 fine and six penalty points, though the DfT says fines can escalate as high as £1,000 and motorists could receive a driving ban in worst cases. 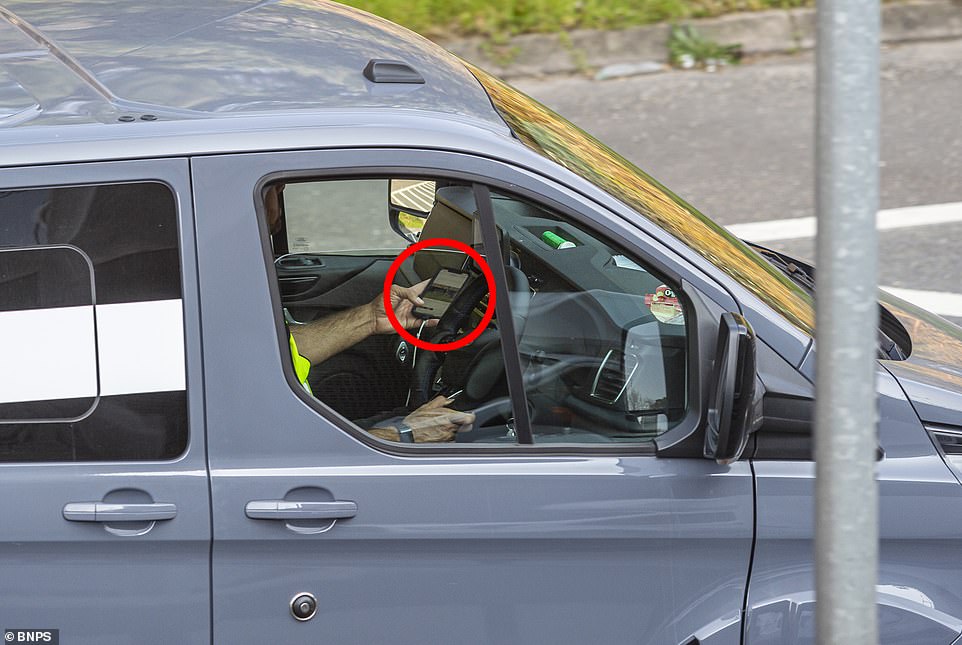 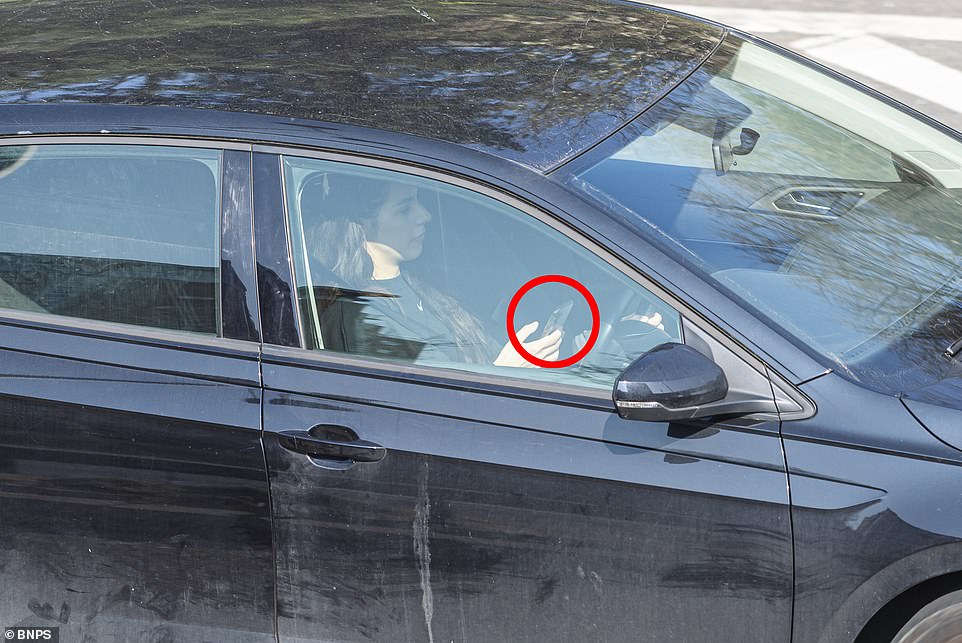 This lady was not looking at the road – and was looking at her phone, brazenly, instead

What about built-in car touchscreen systems?

While some will argue that operating the latest in-car touchscreen infotainment screens is equally as dangerous as using a mobile phone at the wheel, the former is designed to not allow certain features while a vehicle is moving, be voice controlled where possible and limit distraction from the road with a simple menu structure – though this isn’t always achieved.

While some offer television feeds, these can only be accessed when the car is at a standstill.

Most latest systems have compatibility with Apple Car Play and Android Auto, which allow a driver to listen to text messages and formulate new ones with voice commands rather than needing to physically touch the screen.

Announcing the new laws today, Transport Secretary Grant Shapps said: ‘I will do everything in my power to keep road-users safe, which is why I am taking a zero-tolerance approach to those who decide to risk lives by using their phone behind the wheel.

‘I’m ensuring anyone who chooses to break this vital law can face punishment for doing so, and we’ll continue our efforts to ensure our roads remain among the safest in the world.’

Simon Williams, road safety spokesman at RAC, added that a quarter of drivers are still making or receiving calls while driving.

He said: ‘Using a handheld mobile phone at the wheel is illegal and dangerous and, like drink-driving, ruins lives.

‘Worryingly the RAC’s research shows that a quarter of drivers are still making or receiving calls with a handheld phone while driving.

‘Fortunately, the government has changed the law so that any use of a handheld device will automatically lead to six points and a £200 fine.

‘Without a step-change in enforcement more will need to be done to make using a handheld mobile phone at the wheel as socially unacceptable as drink-driving.’

Inspector Craig Tatton, of Dorset Police’s traffic unit, added: ‘I would urge anyone who thinks it is OK to use a mobile phone while driving to seriously consider their actions.

‘Using a mobile phone at the wheel is a distraction and can lead to tragic consequences.

‘We are urging drivers to take responsibility for their actions and leave their phone alone.’

Thu Mar 31 , 2022
Half the nerds I know are into customizing their own mechanical keyboards. As a person who has built his own PCs since childhood, I feel like I should be one of them, but I never wanted to spend the time or effort to get too far into bespoke keyboards. This, […]