Google is best known for its ubiquitous internet services. But the search giant has also cultivated a broad array of hardware products in the last several years spanning across phones, laptops, wireless earbuds and the smart home. Only Google knows what’s next. But if reports and leaks are to be believed, the company could be working on its very first consumer smartwatch.

Google already has a sizable presence in the smartwatch market thanks to its acquisition of Fitbit. Verily, the health tech subsidiary within Google’s parent company Alphabet, has also developed a special health-tracking watch for use in clinical research. But releasing a so-called Pixel Watch would allow Google to go even further and put its own stamp on wearables. If the Pixel is meant to showcase Google’s ideal Android phone experience, a Pixel Watch could be the company’s blueprint for the ultimate Android watch.

Like all great smartwatches, I hope Google’s device has an eye-catching yet comfortable design, long battery life and an attractive screen. But as one of the few outliers in big tech that hasn’t released a wrist-worn device (yes, even Microsoft launched a fitness band back in 2014), Google has a lot of ground to make up.

That being said, Google has offered its own smartwatch software for years. Fitbit’s recent products also drifted into smartwatch territory even before the Google acquisition, so catching up should be pretty manageable.

Of course, that’s if the Pixel Watch is in fact real. Google hasn’t said anything about plans to release a smartwatch, which means we’re relying on rumors and leaks for now. Still, these whispers are enough to pique my curiosity about what Google could bring to the already-crowded smartwatch market. And it’s surprisingly a lot.

Google’s software is a large part of what makes its Pixel phones stand out. As the purveyor of Android, Google plays a significant role in crafting new features for phones from Samsung, Motorola, OnePlus and many others. But Google typically gives its Pixel devices extra perks that either aren’t available on other Android phones or arrive much later. That’s where Google could build unique features into its watch that are missing from the rest of Wear OS, using it as a test bed for software that could trickle down later.

If Google does release a Pixel Watch, I hope it takes this approach. I’m impressed with the way Google has attempted to address some of the inconveniences of modern phone calls through Pixel-specific features on its phones over the last few years. Wait Times, for example, estimates the amount of time you’ll be put on hold before calling a toll-free business number on Pixel phones. Google also taught its digital assistant to wait on hold for you in an appropriately named feature called Hold For Me.

I’d love to see Google be just as thoughtful about the shortcomings of modern smartwatches. It seems like the perfect opportunity for the company to prove just how useful Google Assistant truly can be. Anyone who has worn a smartwatch knows that tiny screens aren’t ideal for scrolling, tapping or typing extensively. Being able to rely on Google Assistant to surface contextual information and process voice requests would be a key advantage. Google gave its Pixel 6 phones a boost in the speech processing and language translation departments with its new Tensor chip, so hopefully we’ll see similar advancements in a future Pixel Watch.

You can already use Google Assistant on certain Fitbits and Wear OS-powered watches to start a workout, check the weather or ask questions, among other tasks. Google’s vision for how software should work on smartwatches is also already evident in the recently overhauled version of Wear OS, which the company launched last year. The latest version Wear OS should be a preview of where the Pixel is likely to head, but expect Fitbit to play a much larger role.

The new software brings faster performance, redesigned versions of Google apps like Google Maps, new navigation shortcuts and a broader selection of third-party apps to Wear OS watches. The revamp was designed in collaboration with Samsung and is currently only available on the Galaxy Watch 4.

But it doesn’t clearly represent the future of all Google watches. Google Assistant was a no-show for a while, and the Galaxy Watch 4 leans heavily on Samsung Health features like electocardiogram (ECG or EKG) that require a Samsung phone. But I hope we’ll see more creative Pixel-specific features on Google’s own smartwatch just as we have with its phones.

As health tracking has become central to the smartwatch experience, gadget makers have found ways to make it a bigger part of their businesses. Fitbit, Oura and Amazon take a subscription-centric approach by requiring a monthly or annual payment to unlock more advanced features. It wouldn’t be out of the question for Google to do the same, although I hope the free experience is still noteworthy on its own.

Since Google owns Fitbit, it wouldn’t be surprising to see the company follow in its footsteps and pursue a similar subscription model. We’ve already seen evidence of this with the second-gen Nest Hub, which will require a Fitbit Premium subscription to access its sleep tracking features starting in 2023. Google also has plenty of experience in digital subscriptions in other areas, including its recently launched Pixel Pass. Given these decisions and the industry’s subscription-focused direction, it would be reasonable for Google to keep some fitness-focused features behind a paywall.

But if Google does take this approach with a future Pixel Watch, I’d still want to see a solid selection of free features, too. As a newcomer to wearables, it would be in Google’s interest to entice customers with compelling built-in functionality before convincing them to pay extra.

That’s especially true if the Pixel Watch turns out to be a high-end device meant to compete with the $400 Apple Watch Series 7 and the $250 Samsung Galaxy Watch 4. Apple and Samsung don’t charge extra for specific fitness-tracking features, which makes sense considering their devices’ premium prices.

Keep in mind, though, that Fitbit has already said it’s releasing a premium Wear OS watch in the future. That watch could end up being the Pixel Watch, with a heavy dose of Fitbit and the subscription service that Fitbit leans on, too. For now, Google still offers its own fitness app called Google Fit, which is distinct from Fitbit’s app.

Most smartwatches are designed to be worn all the time: at the office, during a walk, out to dinner and even to sleep. The problem is that most devices simply aren’t designed to last for multiple days on a single charge. And the ones that do usually require some trade-offs, like a monochrome screen or a much larger design to house a bigger battery.

The Fitbit Sense does a decent job of balancing a broad mix of features and battery life, considering it lasted for roughly two to four days in CNET’s testing. That’s longer than the Apple Watch Series 7 and Galaxy Watch 4 lasted. I hope Google finds a way to draw from Fitbit’s expertise in this area, particularly if it intends to highlight sleep tracking as a main selling point. But early rumors suggest that may not be the case. A report from Insider citing an internal Google feedback document on the watch indicates it may require daily charging.

Of course, battery life will always vary depending on how you use your devices. Keeping the always-on display option turned on and using the GPS to record long outdoor runs typically drains the battery more quickly on most smartwatches.

What we’re expecting from the Pixel Watch based on rumors

Google hasn’t confirmed any plans to release a smartwatch, but a series of leaks and rumors provide some clues possibly indicating what to expect. Google’s smartwatch could have a round design similar to the Galaxy Watch 4, according to reports from insider and YouTuber Jon Prosser. This makes sense, since all other Wear OS watches are round, too. Color options may include black, gold and gray, Android Police reported based on a leak from a carrier’s inventory system earlier this month.

It will also have a heart rate monitor and basic health-tracking features, which isn’t surprising considering even the cheapest wrist-worn gadgets now include these features, according to the Insider report.

Google’s place in the smartwatch market

Above all else, the Pixel Watch would give Google a chance to establish its own presence and identity in a market that Apple and Samsung currently dominate. That should sound familiar, since Google faced a similar challenge when it launched the first Pixel phone in 2016. (Google’s phones have earned a name among critics, but Apple and Samsung still dominate the US and global phone markets).

And just like the wearables industry, Google’s current position in the smartwatch realm isn’t a straightforward one. It doesn’t have a smartwatch of its own, but still holds tremendous influence because of its role as a software provider and its ownership of Fitbit. Google would also be competing against partners like Samsung by releasing its own watch, just as it’s done with smartphones.

Google also has a history of experimenting with new products for short periods of time before retiring or pivoting them. Google Glass glasses, the Nexus Q streaming media player and the Google Clips camera are all examples of such products. So it’s also unclear whether a Pixel Watch would remain for the long term alongside Fitbit’s products.

Still, the Android smartwatch experience is ripe for improvement. Until this point, Android smartwatches have been fragmented, with each device-maker pushing its own software and apps for the most part. Google and Samsung’s new version of Wear OS is a clear attempt to fix that. But those efforts don’t go far enough on the Galaxy Watch 4 just yet, which still feels more like a Samsung watch than a Google watch. If Google follows the same path it did with its Pixel phones, a Google smartwatch could be the more universal, Android-friendly Apple Watch alternative we’ve been waiting for.

Sun Mar 27 , 2022
Systweak is an Indian technology company that makes a host of software tools for PCs and mobile devices. Systweak Advanced Driver Updater is a system optimization tool and driver updater as well as one of the company’s most popular products. It ensures your disk drivers are continually updated to deliver […] 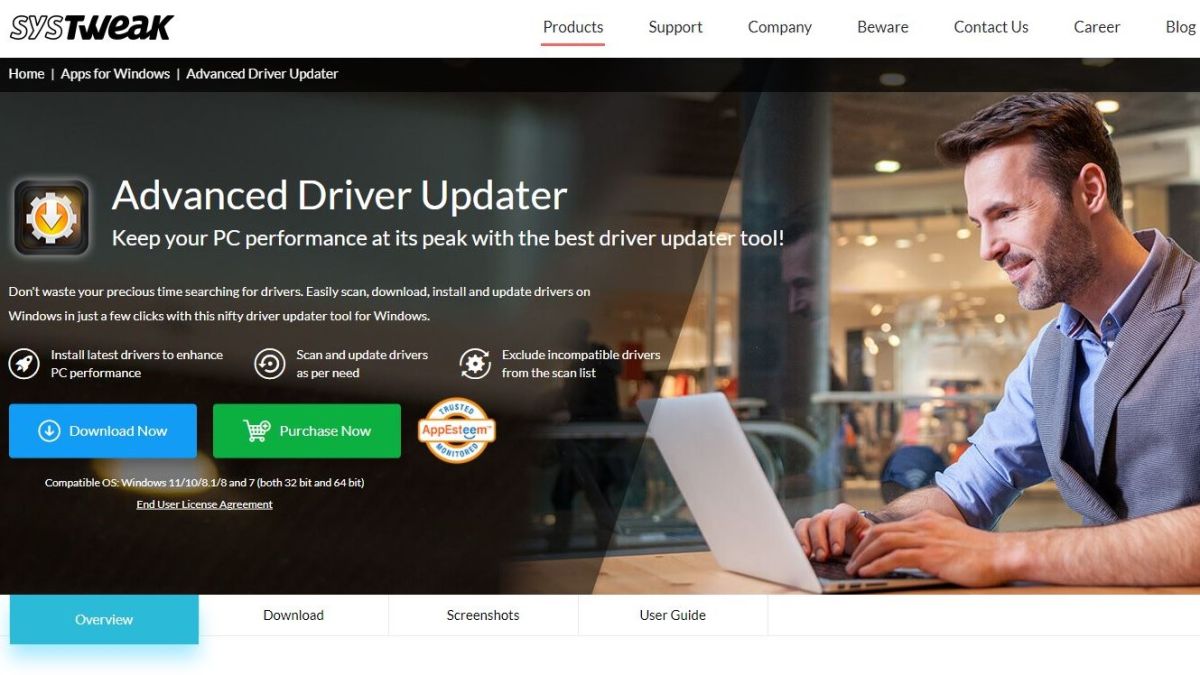