Republicans want Texas to declare an ‘invasion’ at the southern border to give permissions for state troopers and National Guard members to turn back migrants as the country braces for Title 42 to end next month.

Immigration enforcement is giving migrants who are released into the U.S. smartphones with tracking apps installed so they can keep track of released illegal immigrants.

Parole release migrants are being released into the country and are asked to turn themselves into Immigration and Customs Enforcement in a city of their choice and are being given government phones to track them.

There is, however, no way to stop these migrants from getting rid of the phones.

White House Press Secretary Jen Psaki did not deny on Wednesday that migrants are receiving smartphones upon release in the country, claiming during her daily briefing that the government needs to ‘take steps to ensure we know where individuals are and we can check in with them.’

A new report also shows that non-governmental organizations (NGOs) are receiving released migrants with ‘welcome bags and backpacks’ and helping them arrange transportation to a location within the U.S. of their preference.

Pandemic-era Title 42, which allowed for instant expulsion of migrants without hearing their asylum claims during the coronavirus health emergency, is coming to an end on May 23, the Centers for Disease Control and Prevention (CDC) announced on Friday.

Estimates warn that this could lead to a tripling of the already record-breaking number of monthly migrants apprehended by Customs and Border Protection (CBP). 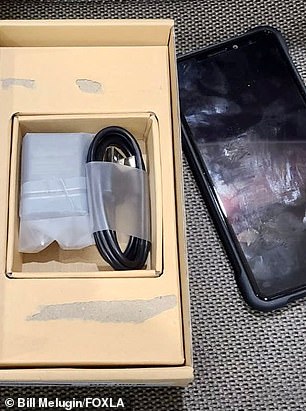 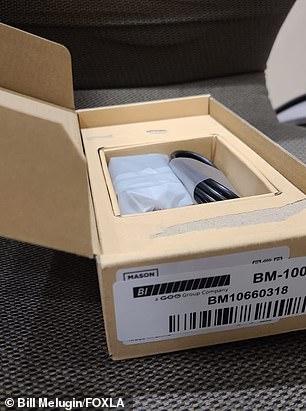 There is no failsafe in place, however, to stop migrants released into the country from ditching the cell phones and evading ICE in whatever city on which they relocate 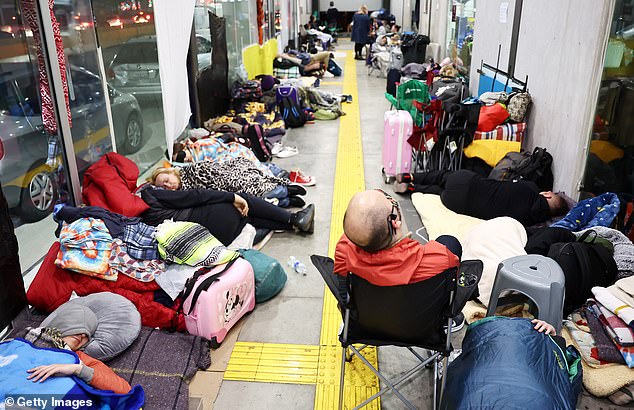 Former Trump administration officials and other Republicans are urging Texas to declare an ‘invasion’ at the southern border in order to use war time powers to expel migrants. Pictured Wednesday, April 5: Ukrainians seeking asylum in the U.S. sleep as they wait at a makeshift encampment in Tijuana, Mexico to cross the border 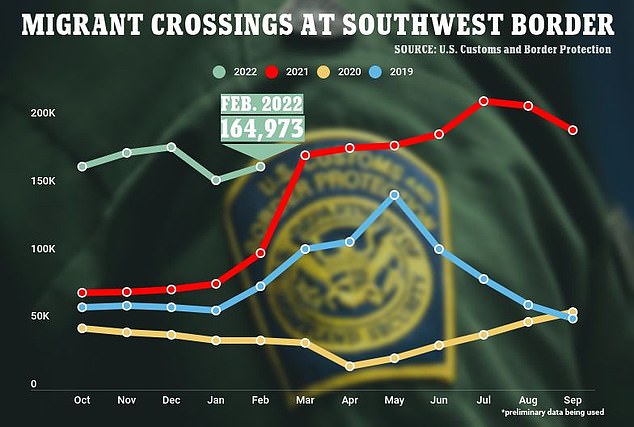 Since Biden took office in January 2021, CBP has encountered more than 2.2 million migrants and the border – and that number could as much as triple with the end of Title 42 next month

Former Trump administration officials are pressing GOP Texas Governor Greg Abbott to make the ‘invasion’ declaration along the U.S.-Mexico border in order to give enforcement powers to troops and Guard members that have previously been the responsibility of the federal government.

Driving the effort on the right is the Center for Renewing America, a conservative policy think tank led by former Trump administration officials, including Ken Cuccinelli, an immigration hard-liner and former Homeland Security official under Trump.

He argued that states are entitled to defend themselves from immediate danger or invasion, as it is defined by the ‘invasion clause,’ under the ‘states self-defense clause.’

Cuccinelli said in practice, he envisions the plan would look similar to the enforcement of Title 42, which circumvented U.S. obligations under American law and international treaty to provide asylum to legitimate claims.

He said he has not spoken with Abbott claiming the governor’s current sweeping border mission, known as Operation Lone Star, has put little dent in the number of people crossing the border. The mission has also drawn criticism from Guard members over long deployments and little to do, and some arrests have appeared to have no connection to border security.

‘Until you are actually returning people to Mexico, what you are doing will have no effect,’ Cuccinelli said.

The urging comes as Abbott prepares to announce Wednesday ‘unprecedented actions’ to deter migrants coming to Texas after the Biden administration announced last week it will end the use of the Title 42 public health law.

The limitations on asylum claims the last two years have been used to prevent the spread of COVID-19 since the onset of the pandemic in March 2020. 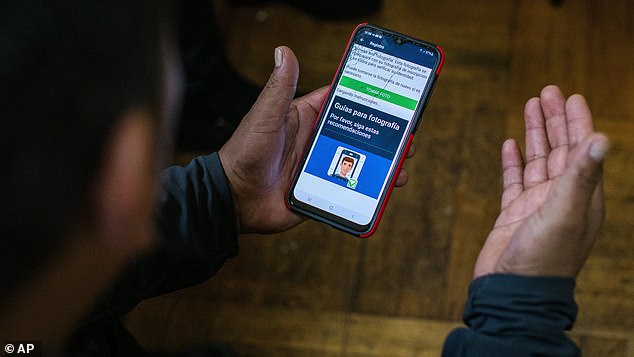 An Ecuadorian immigrant shows the app he uses for reporting his location to ICE during an interview October 21, 2021 as immigration authorities turn to smartphones to keep tabs on immigrants and ensure they attend their deportation hearings

It is unclear whether Abbott, who is up for reelection in November and is already installing more border barriers and allowing troopers to arrest migrants on trespassing charges, supports the aggressive proposals former Trump officials are pushing.

Abbott did not elaborate on what steps he will announce Wednesday.

Border Patrol officials say they are planning for as many as 18,000 arrivals daily once the health policy expires in May. Last week, about 7,100 migrants were coming a day to the southern U.S. border.

But the way former Trump immigration officials see it, Texas and Arizona can pick up where the federal government leaves off once the policy ends. Their plan involves a novel interpretation of the U.S. Constitution to have the National Guard or state police forcibly send migrants to Mexico, without regard to immigration laws and law enforcement procedures. Border enforcement has always been a federal responsibility, and in Texas, state leaders have not been pushing for such a move.

Tom Homan, the former acting director for Immigration and Customs Enforcement under Trump, said at a border security conference in San Antonio last week he had spoken with Abbott but gave no indication about whether the two-term governor supported the idea.

‘We’ve had discussions with his attorneys in his office, ‘Is there a way to use this clause within the Constitution where it talks about invasion?” Homan said during the Border Security Expo.

Homan on Tuesday described the response from Abbott’s office, which he said took place about three months ago, as ‘non-committal but willing to listen.’ 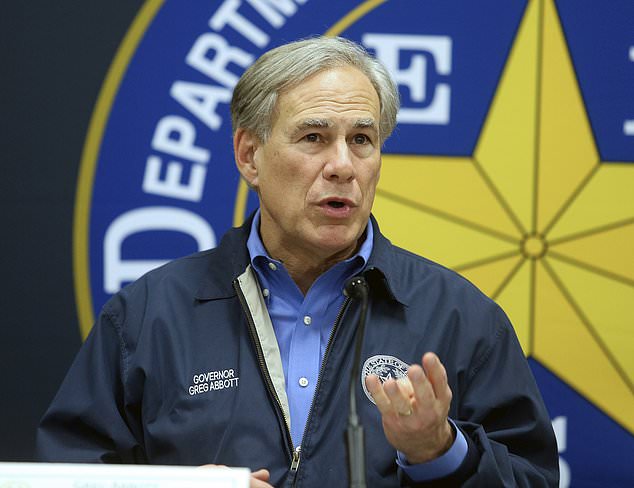 Texas Governor Greg Abbott says he will he announce Wednesday, April 6, 2022, ‘unprecedented actions’ to deter migrants coming to Texas but did not elaborate

In Arizona, Republican Governor Doug Ducey has also been under pressure within his party to declare that the state is being ‘invaded’ and to use extraordinary powers normally reserved for war.

But Ducey, who is term-limited and not on the ballot in 2022, has not embraced the theory and has avoided commenting directly on it.

Arizona Attorney General Mark Brnovich, a Republican, issued a legal opinion in February declaring that Ducey has the power to use National Guard troops and state law enforcement to forcibly send migrants back. Brnovich is locked in a tough Republican U.S. Senate primary in which border security is a top issue.

While speaking Tuesday to a conservative talk radio station, Abbott’s remarks about constitutional authority were in relation to Congress, which he said had the only power to reduce the flow of migrants.

Asked if he considered what was happening on the Texas border ‘an invasion,’ Abbott did not use those words but said he would be discussing it Wednesday.

Emily Berman, who teaches constitutional law at the University of Houston, said the ‘invasion clause’ cited by proponents is tucked into a broader constitutional assurance that the U.S. must defend states from invasion and domestic violence. Additionally, she said, the ‘state self-defense clause’ says states cannot engage in warlike actions or foreign policy unless invaded.

Berman said she hasn’t seen the constitutional clauses used since the 1990s, when the courts ruled that they did not have jurisdiction to decide what qualified an invasion, but believed that one could only be done by another governmental entity.

For example, Berman said, the invasion of Ukraine by Russia can be qualified as one because it is an outside government breaching another country’s boundaries with the use of military force.

‘Just because the state says that it is an invasion that doesn’t necessarily make it so, it is not clear to me what additional legal authority that conveys on them,’ Berman said, adding that state officials can enforce state laws, but the line is drawn at what the federal law allows.

U.S. Rep. Henry Cuellar, a Democrat whose district includes the Texas border, has criticized the Biden administration over border security and ending Title 42. But he does not support states trying to use new powers that would let them ‘do whatever they want.’

‘I think it should be more of a partnership instead of saying, ‘Federal government, we don’t think you’re doing enough, and why don’t we go ahead and do our own border security?” he said.

Fri Apr 8 , 2022
Aha, another gaming laptop that conveniently lets me do a three-in-one review. The new Asus ROG Zephyrus G14 is a more mature-looking replacement for the 2021 version, while also introducing two brand new components from AMD: the Ryzen 9 6900HS CPU and the Radeon RX 6800S graphics chip. Much […]