The Viper v2 Pro is the latest mouse offering from Razer. It builds off its predecessor,  the Viper Ultimate, and streamlines the design with esports players in mind. Things like the side buttons and side grips have been optimized, while other features such as RGB lighting have been stripped away altogether in the name of lightness. Previous highlights, such as the optical sensor, mouse switches, and even the battery, have been improved. In addition, the Viper V2 Pro has a multitude of new intelligent functions via the Razer Synapse software.

Virtually everything about the Viper v2 Pro is an improvement over the previous Viper Ultimate, easily making it a contender for our best gaming mouse list. However, despite the functionality of the Viper v2’s weight-saving measures, something about its lightness and material makes the mouse feel a little cheap.

The Razer Viper V2 Pro is similar in appearance to its Viper Ultimate Wireless predecessor sans the lighting, with an all-matte black design akin to Razer’s DeathAdder line. However, a few key things, including the lighting within the tri-skeleton branding, have been jettisoned to make the mouse lighter. For instance, there are only two buttons on the right side of the mouse, removing the other two buttons on the left for ambidextrous users. The small compartment underneath most Razer’s mice used to store the 2.4GHz proprietary dongle has been removed and was replaced with an adapter that can hold the USB-shaped dongle. However, a button to cycle through the mouse’s 30K DPI is located underneath and also serves as the power button.

There’s no grip on the side of the mouse, but there are varying pieces of grip tape that come in the package for people that prefer some customization. There are two wide grips for each side of the mouse and two slimmer grips, one that is rounded with three edges and another with five edges like the Batman symbol. Although using these grips improved how the Viper V2 Pro felt in my hand, I disliked the materials used. They smell like an Auto Zone as soon as you open its packaging. And after applying the sticky grip to the mouse with the surgeon-like precision, they feel like tire rubber grinding against your thumb in practice. The grips peel off like snakeskin and are not fun to interchange on the fly.

A grip really should have been a part of the ergonomics of the Viper V2 Pro. The material used for the mouse is quite slippery, and a contrasting material would make my hold feel more secure. Unfortunately, these grips don’t feel nearly as premium or part of the overall design as the built-in grip on the DeathAdder V2.

The Viper V2 Pro is only 1.49 inches (37.8mm) tall, and its height may be a hindrance for folks with larger hands who prefer a claw grip. I could only rest my meaty claws comfortably on the mouse with a palm grip.

The Razer Viper V2 Pro weighs an astonishing 58g, cutting 16g from the original Viper Ultimate Wireless. While I understand the functionality behind the featherweight design, the mouse may feel too hollow to use daily outside of esports purposes, where swift motion is paramount.

Below the wheel is an LED light that blinks and changes color depending on the status of the Viper V2 Pro. The status indicator blinks red twice in repeated intervals when the battery is less than 5%. From there, the light pulses orange, yellow, and finally a static green once it’s fully charged. When cycling between DPI, the LED light changes accordingly to indicate each setting. Red is 400, green is 800, blue is 1600, cyan is 3200, and yellow is 6400 DPI.

The Razer Viper V2 Pro charges via the threaded USB-C to USB-A cable included in the package. It can also connect wirelessly via its 2.4-GHz USB-A dongle. The Razer Viper Pro has seven programmable buttons, one fewer than the Viper Ultimate, and two fewer than the original Razer Viper 8K. Razer also upgraded the 5G Advanced Optical Sensor to a 70G sensor.

Razer boasts that the Viper V2 Pro is the first gaming mouse to track accurately on glass. And although I can’t say if its “world’s first” claim is true or not, the mouse can absolutely track well on just about anything, including my glass table. I was able to use the mouse on everything from my bedsheets to my sweatpants with no difference in performance.

The Razer Viper V2 Pro has extremely snappy optical switches, introducing its Gen 3 switches that promise 20 million more clicks than previous designs. The switch zones are generously large and tactile, ensuring you’ll never click down on a switch by mistake. When playing BioShock Infinite, every click felt like the squeeze of a trigger in Booker’s hand. The scroll wheel also felt much more tactile and ridged on the finger than the scroll wheel on the DeadAdder V2. When I used both mice to scroll, the ridges on the Viper V2 Pro felt satisfying on my finger, and like I had more control over the wheel’s motion. I seamlessly switched between guns in Mass Effect: Legendary Edition, and I smoothly cycled through the three guns fast and with precision.

Although I usually prefer playing games with a mouse set around 1600 DPI, 3200 DPI feels amazing. I played Mass Effect: Legendary Edition on my 48-inch LG CX and everything felt responsive, movements were snappy, and it made my firing that much more effective in-game. I quickly changed my perspective over and over, going in circles, and never encountered microstutters. However, the maximum 6400 DPI sensitivity felt like overkill. My movements were all over the place, I couldn’t focus my line of fire, and there was no precision to be found under these circumstances. It doesn’t seem useful in any practical circumstances, but then again, I’m no esports player.

On the subject, the two side buttons are hair-trigger sensitive. Although I can see situations where that sensitivity would be useful, it felt like I could press one by mistake when I meant to press the other. The DeathAdder’s side buttons are bigger and more defined. When I click them, they need more pressure to confirm inputs, whereas the buttons on the Viper V2 Pro were thinner and easier to push with my thumb.

Although the lightweight design of the Razer Viper V2 Pro bothers me in practical use, it does serve for faster movements in-game. Paired with an extremely high DPI count and very responsive optical switches, the Viper V2 Pro could be a game-changer and a determining factor in your playing efficiency, especially if you often play competitively. However, at the same time, the folks who need a bit of density to their gaming mice may be thrown off entirely by its lack of weight or built-in grip.

Razer Synapse 3 is a finicky program that you’ll need to install to utilize the Hypershift function, which allows you to apply shortcuts and dual functions to its seven buttons. You’ll also need Synapse to utilize the Hyperspeed Multi-Device Pairing function. This allows for improved latency across wireless Razer products akin to wired connections. The performance tab of the Viper V2 Pro’s settings lets you adjust the DPI on the fly by choosing one of its five settings. You can even change each setting’s X/Y axis at your discretion and reduce the number of settings from five down to two. The polling rate can also be adjusted from its default 1000 Hz, to 500 Hz, down to 125 Hz.

The next tab is for mouse matt surface calibration, which allows you to adjust the tracking distance of the optical sensor. There’s also an Asymmetric Cut-Off function you can enable to adjust the lift and landing sensitivity of your mouse if it’s having tracking trouble on whatever surface it’s touching. However, I never had much need for it, since the mouse tracked well on every surface I encountered.

Finally, a power tab allows you to tweak wireless power-saving and make the mouse sleep after being idle for anywhere between one and 15 minutes. There’s also a low-power mode that will enter such mode after the battery percentage hits whatever number you set.

The Razer Viper V2 Pro is a strong choice for a gaming mouse, depending on how you intend to use it. I can only recommend this mouse to serious competitive gamers or those that are part of the esports community. Only they would be able to appreciate and notice the performance enhancements the mouse delivers. Even then, I would not recommend it as an all-purpose mouse. This is something you whip out during competition exclusively, as its lithe frame and ergonomics may throw off non-competitive players.

That being said, for the price of $150, I wish the separate grips were of better quality, or better yet, part of the overall design. The optional grips made my hold feel better when grasping the mouse, but the friction of its material began to annoy me during use.

Something like the DeathAdder V2 would much better serve an all-purpose gamer who wants a mouse that is usable throughout all aspects of their computer life. It’s much cheaper, feels more dense , and has a max 20K DPI setting.

Fri May 13 , 2022
Today’s best G.Skill Trident Z5 RGB Series 32GB (2 x 16GB) DDR5-6400 deals Despite all the benefits that DDR5 brings to the forefront, the new memory standard didn’t start off on the right foot. The fact is that DDR5 debuted in the middle of a global semiconductor shortage, which hindered […] 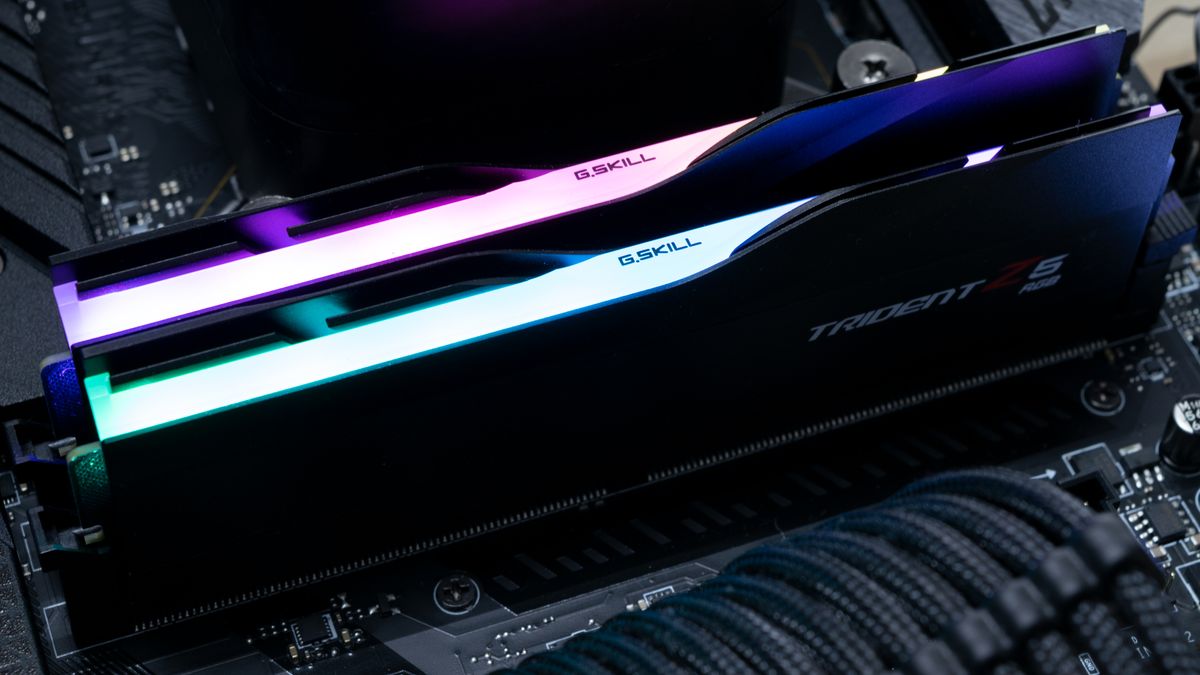