Scott Durvin says he faced aggressive questioning from a Chesterfield County Police detective after his friend died of a drug overdose at the end of 2019. What he didn’t know at the time was that police had also begun secretly tracking his whereabouts by ordering Verizon Wireless to regularly ping his phone’s GPS and report his location back to detectives in real time.

“That’s kind of shocking, really,” Durvin said, reached by phone at the same number police were using to follow him virtually a little more than two years ago. “The detective would call me all the time and try to get me to give them information and he would threaten to lock me up. But I didn’t have anything to do with it and he finally left me alone.”

Police never described Durvin as a suspect in the search warrant application they submitted seeking permission to track him and court records show he has not been charged with any crimes in Virginia since police took out the warrant.

Instead, officers wrote that they had found voicemails from Durvin on the overdose victim’s phone and thought tracking his location might help them figure out who supplied the deadly dose of heroin, noting that Durvin had been with the man during what appeared to be a prior overdose in Richmond.

The case offers a glimpse into a surveillance technique that’s become commonplace for police but is mostly unknown among the general public: cell phone location tracking.

Public records requests submitted to a sampling of 18 police departments around the state found officers used the technique to conduct more than 7,000 days worth of surveillance in 2020. Court records show the tracking efforts spanned cases ranging from high-profile murders to minor larcenies.

A state law passed with little notice in 2015 authorizes the surveillance as long as police first obtain a search warrant from a magistrate or judge, but in practice, the bar for judicial approval isn’t particularly high. Officers simply have to attest in an affidavit that they have probable cause that the tracking data is “relevant to a crime that is being committed or has been committed.”

The warrants are limited by law to 30 days but can be — and often are — renewed monthly by a judge.

“I don’t think people know that their cell phones can be converted to tracking devices by police with no notice,” said Steve Benjamin, a criminal defense lawyer in Richmond who said he’s recently noticed an uptick in cases in which officers employed the technique. “And the reality of modern life is everyone has their phone on them during the day and on their nightstand at night. … It’s as if the police tagged them with a chip under their skin, and people have no idea how easily this is accomplished.”

In Durvin’s case, the justification police gave for tracking him came down to a single paragraph in the search warrant application asserting officers believed it might help their case.

“It is in your affiant’s experience that users of narcotics will associate with other users and suppliers of narcotics in the drug trade,” wrote Det. G. Hopkins. “Your affiant believes the real time location data … will assist in the on-going investigation into the supplier of narcotics.”

‘We will use all lawful tools at our disposal’

Records reviewed by the Mercury suggest Chesterfield police are among the more prolific users of the technology in Virginia.

The department makes no apologies for its embrace of phone tracking. “We exist to preserve human life and protect the vulnerable, and we will use all lawful tools at our disposal to do so,” Chesterfield County Police Spokeswoman Elizabeth Caroon said in a statement.

To assess how widely police in Virginia employ cellphone tracking, the Mercury submitted Freedom of Information Act requests to police departments around the state seeking billing records from telephone companies, which charge police departments daily or monthly fees to report their customers’ location to officers.

To understand what kinds of cases police are using the technology to investigate, the Mercury also reviewed all unsealed search warrant applications filed in 2020 in the city of Richmond and Chesterfield County. The documents, which are presented to magistrates or circuit court judges to justify and obtain permission to conduct the surveillance, describe the crimes under investigation and the basic facts of the individual cases.

Drug investigations accounted for more than 60 percent of the search warrants taken out in the two jurisdictions. Larcenies were the second most frequent category. Major crimes like murders, rapes and abductions made up a fraction of the tracking requests, accounting for just under 25 of the nearly 400 warrants filed in the jurisdictions that year.

In Richmond, Maj. Ronnie Armstead said in an interview the department leaves it to individual detectives to determine when and how to use cell phone tracking. And he said officers don’t distinguish between major and minor cases — they just want to solve crimes: “These detectives do a thorough investigation,” he said. “They don’t care what size fish you are.”

In practice, that means officers used the technique in high-stakes drug investigations as well as more run-of-the-mill investigations.

Court records show police used phone tracking extensively in the investigation that led to the arrest of Nikike Tyler, who authorities allege led a regional drug ring that imported and distributed large quantities of heroin, cocaine and marijuana. Search warrants filed by a regional drug task force in Richmond indicate officers tracked Tyler’s cell phone for more than a year, updating warrants as he regularly changed cell phone numbers, according to affidavits on file.

Records show police also turned to location tracking when a former employee of a Mexican food restaurant in downtown Richmond, Café Ole, was accused by an ex-girlfriend of stealing $200 from the register. According to the warrant on file, a Richmond officer received permission to track the man’s location for 30 days after a visit to his mother’s house in Goochland failed to turn him up.

Sometimes, police sought the warrants even in cases where officers weren’t sure who exactly they were tracking.

In one Chesterfield search warrant application, an officer wrote in their affidavit that an unnamed person he described as “a reliable confidential source” had given him the phone number for an alleged drug dealer named “Weedy” who his source had heard was coming to the Richmond area to sell heroin. A magistrate approved the warrant based on the officer’s justification that “real time location data collected during this investigation will assist in identifying ‘Weedy,’ potential co-conspirators and locations utilized for conducting drug transactions.”

The U.S. Supreme Court ruled that warrantless cellphone tracking is unconstitutional back in 2012. Since then, there’s been limited public discussion or awareness of the kinds of tracking warrants the judiciary is approving.

When Virginia passed a law three years later setting out the warrant requirement in state code, it drew almost no notice in the General Assembly, passing unanimously on every vote. The bill’s patron, then-Del. Manoli Loupassi, a Richmond lawyer, said he had little recollection of the legislation and was surprised to hear how often police now use the statute to enable cell phone tracking.

“I think the original intent was to capture and ferret out extremely serious criminality,” Loupassi said. “Not just nothing cases. And this is one of the millions of examples of how the road to hell can be paved with good intentions.”

Police officials, meanwhile, argue it only makes sense to take advantage of technological advances. Dana Schrad, the executive director of the Virginia Association of Chiefs of Police, said departments often don’t have the resources to conduct physical surveillance. And even if they did, she said cell phone tracking is safer.

“It may be considered an intrusive way of gathering data on someone, but it’s certainly less dangerous than physical tracking,” she said.

Back in Chesterfield, police officials described their use of cell phone tracking as part of an effort to proactively investigate drug crimes, suggesting the effort had helped keep the number of fatal overdoses from rising in the county.

“We believe our continued robust enforcement efforts are part of why the numbers haven’t increased further in Chesterfield,” Caroon, the department’s spokeswoman, said.

Meanwhile, Durvin, who Chesterfield police tracked in the 2020 overdose investigation, counts himself among those who considers the technique intrusive. “It’s kind of f**ked up,” he said. “I feel like my privacy was violated. And who’s to say they ain’t still doing it?”

Use of real time location tracking varies significantly by police department, according to billing records and search warrants reviewed by the Mercury.

Two additional departments indicated that they utilize real-time location warrants but requested high fees to provide records documenting the surveillance: Alexandria Police Department and Loudoun County Sheriff’s Department. (Fairfax Police requested more than $550 to provide the invoices requested but voluntarily reported that they took out 56 of the warrants in 2020.)

All figures are for invoices received in 2020 except in the case of Hanover, which provided figures for 2021.

The days of surveillance by Chesterfield County Police are partially estimated because the department was the only one to redact dates of surveillance on its invoices and one wireless carrier, Sprint, charges a flat monthly fee, making it impossible to calculate the number of days tracked based on invoice totals. However, the figure most likely represents an undercount because the department provided no receipts from Verizon despite filing warrants requesting tracking from the company.

Richmond Police Department was the only department that provided no response to a FOIA request for billing records and figures are based on a review of court records.

Thu Apr 21 , 2022
AppleInsider is supported by its audience and may earn commission as an Amazon Associate and affiliate partner on qualifying purchases. These affiliate partnerships do not influence our editorial content. Playdate is a new gaming console from the beloved Mac development studio Panic. It’s small, has a metal […] 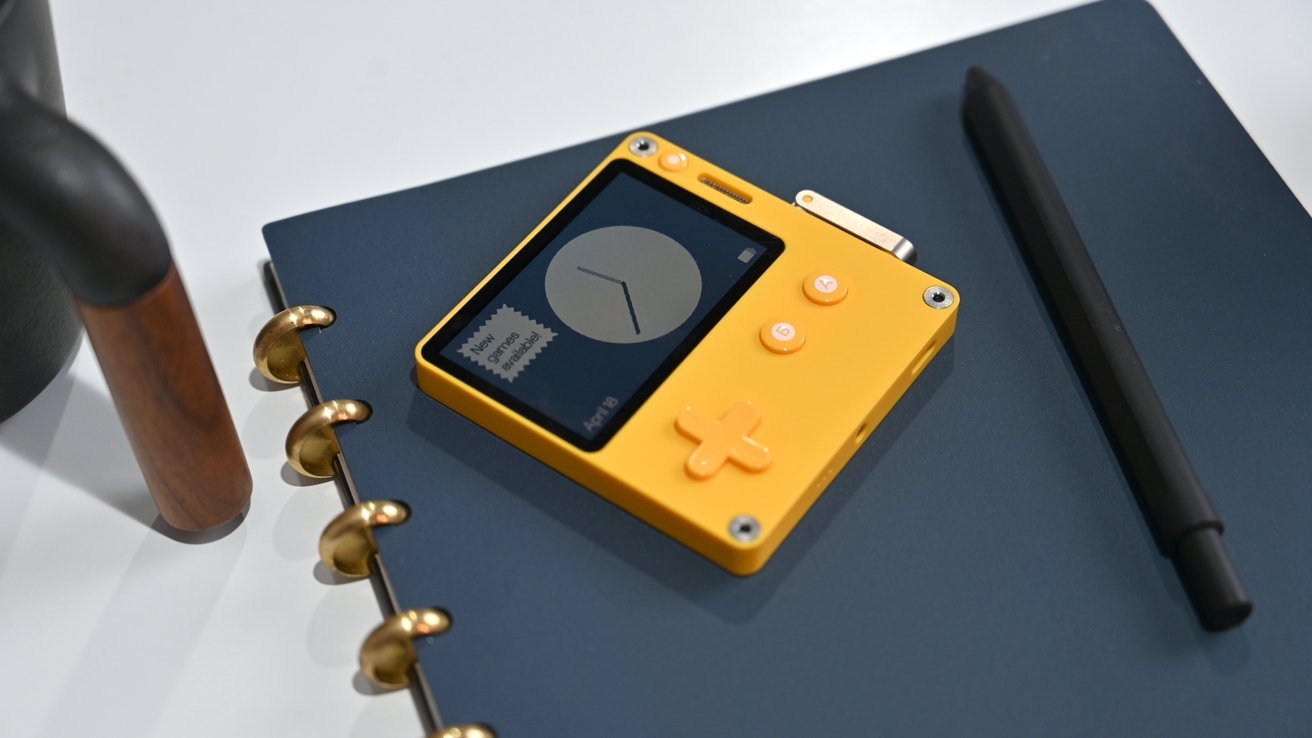